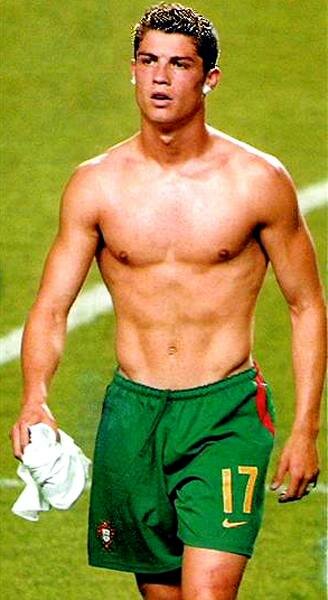 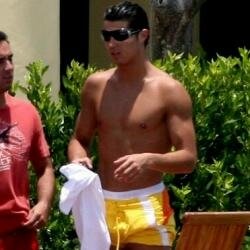 For anyone who was hoping that Ronaldo is gay, sorry to let you down!  He loves the punani so much that he is willing to pay for it!  Regardless, he's still VERY pretty to look at.

The five girls travelled 60 miles by taxi from Leeds to Ronaldo’s home on the outskirts of Manchester to party with the players, who were celebrating United’s first victory of the season against Spurs this week.

The girls spent around six hours romping with Ronaldo, his team-mate Anderson and several other men in the pool, Jacuzzi and changing rooms.

The girls took a series of photos inside the house on mobile phones — one even videoed and snapped Brazilian midfielder Anderson naked apart from a pair of boxer shorts.

The stars laid on booze for the party as they cavorted with the girls — leaping in and out of the pool in the early hours. Some of the girls went skinny-dipping.

The girls all work through McKenzies Escort agency based in Leeds.

The party evidently went on all night long starting Sunday night and not ending until 5am on Monday morning when the girls were asked to leave because Ronaldo was tired and sleeping.

Why would Christiano have to pay for sex?  Afterall, he is the second hottest soccer stud alive.  Only behind Mr. David Beckham, of course!

dammmmmnnnnn look at his bulge in the yellow short. sexy boi is packin'!

why would he "have" to pay?? for the same damn reason guys pay one of those 'rentboy', THAT'S WHY. no freakin difference among the sleeze folks.

TrackBack URL for this entry:
http://gaysocialites.blog/cgi-sys/cgiwrap/cwinters/managed-mt/mt-tb.cgi/2150