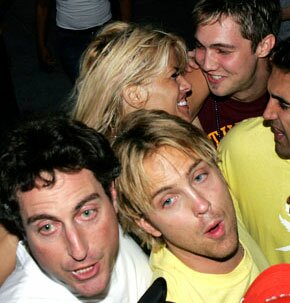 Pretty boy Larry Birkhead is persistently denying that he is gay.  He even seems more concerned about making sure the world knows that Howard K. Stern was never his love interest.

Anna Nicole Smith's baby daddy seems to have a lot of answers!

The folks over at Towleroad dug up the picture above where Larry and Howard are obviously enjoying gay pride in West Hollywood.  So, why would Birkhead be having so much fun at pride if he isn't gay?  He says he was working.

"Zero truth to it. I don’t know how Cosby can print lies like that without once attempting to contact me. That’s journalism 101. I was a photographer. My camera is around my neck in every picture," Birkhead said.

As the folks at Towleroad point out, there is no camera around Larry's neck in this picture!  As a matter of fact, he and Howard K. Stern look awfully cozy!

I dont think he should resign. If he is gay(which he probably is) he should STOP lying about it and just come out. Its ok to be gay. However, there is nothing worse than an old lying cheating hypocritical gay man who needs to get off by trolling bathrooms in search of sex. If he declares himself gay or bi-sexual then he gets to keep some respectability I think.

TrackBack URL for this entry:
http://gaysocialites.blog/cgi-sys/cgiwrap/cwinters/managed-mt/mt-tb.cgi/2195