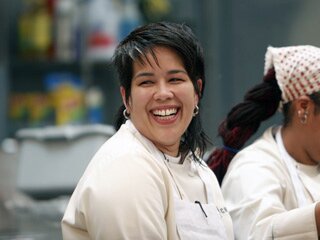 Former Top Chef contestant Josie Smith-Malave relived her gay bashing as she told her story to the New York Post on Wednesday.

Smith-Malave and some friends were beaten up in Long Island as they left a bar.  She says they were followed out of the bar.  Josie's sister, who is straight, was also attacked.

September 13, 2007 -- A former "Top Chef" contestant yesterday recounted the ordeal of being surrounded outside a Long Island bar by thugs who savagely beat her and two female companions while others watched, laughed and took photographs.

"It was a very large group of young adults. I mean, they were so angry," said Josie Smith-Malave, 32, an openly gay woman who appeared on Season Two of the show.

"I've never experienced something like that before, when you come face to face with people who are so angry."

Smith-Malave said the trouble began when she, her heterosexual sister, Julie Smith, 30, and her gay friend, Emily Durwood, 23, were asked to leave Partners, a Sea Cliff bar, on Sept. 1.

The three women were followed outside by "a mob of nine to 12 young adults," said a statement released by attorney Yetta Kurland's office.

The group "encircled" the trio, started shouting out hateful slurs. such as "f - - - ing dykes," threw "sticks, cups and other objects" at the women, and even spit on them before the violence occurred, the statement added.

TrackBack URL for this entry:
http://gaysocialites.blog/cgi-sys/cgiwrap/cwinters/managed-mt/mt-tb.cgi/2253