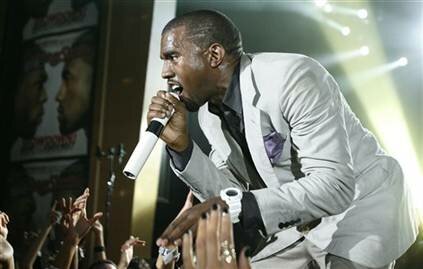 Kanye whose album drops on Tuesday evidently feels like he should have been the featured performer.

“I can’t believe she would perform,” West told the Associated Press. “She hasn't’t had a hit record in years.”

According to MTV.blog, Kanye is scheduled to perform his track, “I Wonder,” during Sunday's show; however the Associated Press is reporting that West was upset that he was not invited to open the event.

Kanye has made his anxiety pretty well known about the drop of his newest record, “Graduation."  On Tuesday, we will go head to head with 50 Cent to see who can climb the charts the fastest when the two rappers both release their newest albums at the same time.

By the end of next week, I'm sure Britney will be the least of Kanye's concerns.

For goodness sake, cant anything be done about the rascism and homophobia in these comments?

wow jack.
you must be eating those words now, huh, buddy?

I always liked your music, but saying that is being sooo ignorant, seriously, get the fuck off the stage.

MTV features a lot of black people, so don't be talk shit about skin color.

I'm getting tired of Kanye....talk about a tool. The worst part is the skin not right thing. Come on, is this guy serious? Talk about doing nothing but perpetuating the behavior that really is keeping black people down.

I can't believe you said the N word that is so ignorant. I think Kanye West is full of himself but that in no way excuses the use of that word.

Comments on this article are now closed. If you cannot discuss & comment like adults then there shall be no further commenting. All comments containing racial and homophobic slurs have been deleted.

TrackBack URL for this entry:
http://gaysocialites.blog/cgi-sys/cgiwrap/cwinters/managed-mt/mt-tb.cgi/2212