« Playgirl Vanessa Hudgens is in some legal trouble! | Main | Dan Rather sues over losing CBS job » 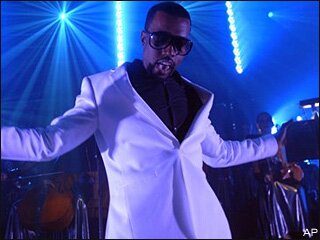 It's official, Kanye West has destroyed 50 Cent in record sales after both of their albums "Graduation" and "Curtis" (repectively) dropped on September 11th.

As per Fiddy's promise, he must now retire.

My question is: When is Fiddy calling it quits?! and When is the big announcement?!

What do you think? Should 50 really retire?!

NEW YORK (AP) — Just hours after he was officially crowned the victor in his much-hyped sales battle with 50 Cent, Kanye West turned up at GQ's 50th anniversary party as the featured performer.

But the evening was more like a coronation for West, whose "Graduation" widely outsold 50 Cent's "Curtis" in first week sales, according to Nielsen SoundScan: 957,000 copies to 691,000 copies.

"To be a champion, you've got to take out a champion," West declared Tuesday night, as an all-star crowd including Jay-Z, Beyonce and Diddy cheered him on. Moments later, he called for his "theme music," then launched into a performance of his song "Good Life."

Things couldn't be much better for West, who gave the struggling music industry its best debut of the year with "Graduation," besting the year's previous first-week champ, Linkin Park, which sold 623,000 of "Minutes to Midnight" when it debuted in May.

"It feels overwhelming," West told The Associated Press earlier in the day. "Everyone is coming up to me and telling me how proud they are of me."

Though selling almost 700,000 copies in the first week is a sterling achievement, it was still a considerable letdown for 50 Cent. His last album, 2005's "The Massacre," sold 1.1 million in its first week. In fact, West's "Graduation" is the only other album to come close to that figure since.

Last month, 50 didn't think of West as much of a competitor: "It's great marketing on Def Jam's part, by putting us out there at the same time and make like we can actually be compared on some level," he told the AP. In another interview, he said he would retire if West outsold him.

Fifty, who is planning a world tour for his album, was conciliatory in defeat. In a statement to the AP, which didn't address whether he planned to make good on his vow to retire, he said: "I am very excited to have participated in one of the biggest album release weeks in the last two years. Collectively, we have sold hundreds of thousands of units in our debut week. This marks a great moment for hip-hop music, one that will go down in history."

Indeed, Billboard.blog reported that the top four-selling albums, including Kenny Chesney's "Just Who I Am: Poets & Pirates," and "High School Musical 2," sold 2.2 million copies, more than the top 200 albums had sold in the previous week combined.

But while West is enjoying a No. 2 position on the charts with his hit "Stronger," 50 has struggled to connect with radio. None of his songs has matched past smashes like "In Da Club"; even his single "Ayo Technology," featuring Justin Timberlake and Timbaland, is languishing at No. 19.

50's album was originally scheduled to be released in June on Interscope Records, a division of Universal Music Group, but was pushed back to Sept. 11. Soon after, Kanye West, whose album was supposed to come out sometime in late summer, pushed his date to Sept. 11 as well.

West said it was his idea to go directly against 50.

"I was the underdog because I sold less records in the past, so it was a win-win for me," he said. "If I lost, everyone would be happy that I even went up against him."

It ended up the music industry version of Ali-Frazier, with an avalanche of pre-fight hype to match. 50 routinely trash-talked West, but it seemed to be in good fun: The pair made several appearances together, including on a recent cover of Rolling Stone. Both admitted the battle was a great marketing tool.

"The rivalry helped both of them," said Jay-Z, president of West's label Def Jam — also a division of Universal Music Group. "It was definitely one of those moments in the game that was exciting, everybody could pick a side and weigh in on and have an opinion ... it garnered a lot of attention."

West said the quality of his music was the key reason he prevailed: "I think my music is really inspirational and I really made it for the people. I really understood that in this Internet age people are their own superstars ... the best bet that we had was to make a soundtrack to their own lives."

He said he was especially touched that he had such a groundswell of support given some of the negative media attention he's gotten of late; namely, his meltdown at the MTV Video Music Awards after being shut out (though he poked fun at himself during Sunday's Emmy Awards).

"With all the negativity that the press tries to put on me, this perception that they try to create of me being a really bad person — for so many fans to go out and say, 'We still want to buy Kanye's album,' means a lot to me," he said. "This is a really pivotal moment for me emotionally."

Jay-Z, who is featured on a new 50 Cent remix of his hit "I Get Money," said this setback could actually benefit 50 in the long run.

TrackBack URL for this entry:
http://gaysocialites.blog/magazine-mt/mt-tb.fcgi/2323