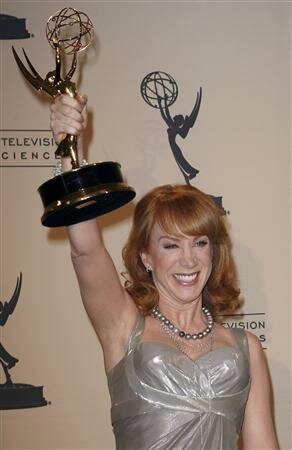 Kathy Griffin sure knows how to get her name in the headlines.  The A-lister who owns the rights to the D-list caused some controversy while accepting her Emmy for best reality program for her Bravo channel show "My Life on the D-List."

"A lot of people come up here and thank Jesus for this award. I want you to know that no one had less to do with this award than Jesus," an exultant Griffin said, holding up her statuette. "Suck it, Jesus. This award is my god now."

Backstage, Kathy showed no remorse for her acceptance speech.

"I hope I offended some people. I didn't want to win the Emmy for nothing."

The speech drew fire from the Catholic League for Religious and Civil Rights, which condemned Griffin's remarks as "obscene and blasphemous."

On Tuesday, the Academy of Television Arts and Sciences announced "Kathy Griffin's offensive remarks will not be part of the E! telecast," an academy spokeswoman said on Tuesday. Instead an "abbreviated version" of her acceptance speech will air, instead, she said.

Griffin's publicist issued the following statement on her behalf: "Am I the only Catholic left with a sense of humor?"

Boo!  I think it's her freedom of speech to say whatever she wants.  I don't necessarily agree with her whole "suck it Jesus" remark, but it's her right to say what she wants.

TrackBack URL for this entry:
http://gaysocialites.blog/magazine-mt/mt-tb.fcgi/2240