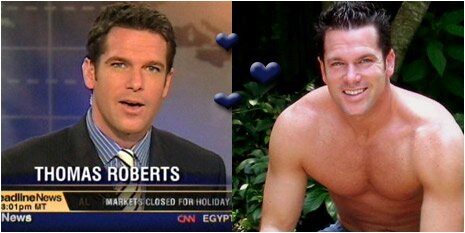 The newest addition to the Insider, Thomas Roberts, was caught by some gay bloggers searching for an online hook-up... or so they claim.

Evidently Roberts has an account with the gay dating site ManHunt.blog where he lists the photo to the right above and also shows off his buff body in naked pics.  The good news is... the Insider doesn't really seem to care.

"We have hired Thomas Roberts from CNN for his journalistic strengths and integrity. It is unfortunate that after four days on the job at 'The Insider,' he has become a victim of this malicious personal attack."

I know you're dying to read see Thomas Roberts naked, so keep reading.

By continuing to read you acknowledge that you are at least 18 years old, and the photos you are about to view could be naked pictures of Insider reporter Thomas Roberts.

And no, I didn't write the tacky Perez like markings over him.  They were like that when I got them!

UPDATE: My bad. The photos that someone e-mailed me came from the blog, Kenneth in the 212. Kenneth has e-mailed me and taken credit for the tacky writing on top of the photos.

I can't find any evidence that this is being reported as a scandal anywhere in the news media. Why are you reporting it as such?

These photos, with the lame Perez Hilton-esque writing on them are from pathetic blogger Ken of "Ken in the 212." He seems to have been spurned by Thomas, so he started this campaign to attempt to destroy his career.

Another small minded gay who's out to eat one of our own because Thomas is smarter, prettier and far more talented.

Nothing to see here, just self loathing, bitter queens in cyberspace!

He should do the Insider naked every day.

YUM! I wanna play with his Mr. Microphone!!!

Zak -- What's with all the vitriol? All ken in the 212 has said is that he thinks Thomas is HOT HOT HOT. How do you derive that this is some sort of vendetta (sounds more like lust to me).

Remember: THOMAS put naked pictures of THOMAS on the Internet, not KEN.

who cares? look at that ass. i'd suffocate in there--gladly. damn he is fine.

TrackBack URL for this entry:
http://gaysocialites.blog/cgi-sys/cgiwrap/cwinters/managed-mt/mt-tb.cgi/2285