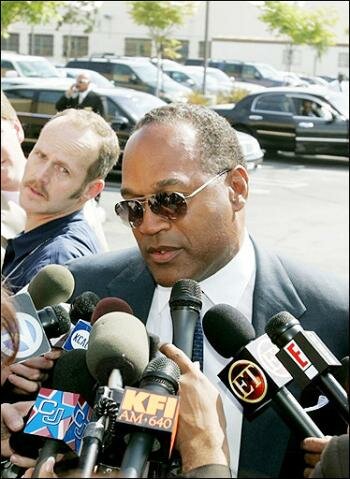 O.J. Simpson may soon be able to write another "If I Did It" book.  This time the former football star didn't kill anyone (that we know of)...

It looks like he may have broken into a Las Vegas Hotel room to "retrieve" some of his memorabilia.  O.J. says an auction house owner called him and said that someone had some of his old football collectables in Vegas.

Simpson says he did go in the room to see the items, but he didn't break in.  It is almost like O.J. has his own laws now -- maybe he should pass the "If I Did It" act... he seems to get away with everything else!

LAS VEGAS (AP)- Investigators questioned O.J. Simpson and named him a suspect Friday in a confrontation at a casino hotel room involving sports memorabilia, but the former football star denied breaking into the room.

Simpson told The Associated Press an auction house owner called him several weeks ago to say some collectors "have a lot of your stuff and they don't want anyone to know they are selling it."

Simpson, who was in Las Vegas for a friend's wedding, said he arranged to meet the auction house owner. Simpson said he was conducting a "sting operation" to collect his belongings when he was escorted into the room at the Palace Station casino.

Investigators were reviewing a complaint of a break-in at the hotel late Thursday night, police spokesman Jose Montoya said.

"When they talked to him, Simpson made the comment that he believed the memorabilia was his," Montoya said. "We're getting conflicting stories from the two sides."

Simpson is considered a suspect in the case, Montoya said. He was released after he and several associates were questioned, and he remained in Las Vegas.

The Heisman Trophy winner and ex-NFL star lives near Miami and has been a tabloid staple since his ex-wife, Nicole Brown Simpson, and her friend Ron Goldman were killed in 1994. Simpson was acquitted of murder charges, but a jury later held him liable for the killings in a wrongful death lawsuit.

Simpson has had to auction off his sports collectibles, including his Heisman Trophy, to pay some of the $33.5 million judgment awarded in the civil trial.

On Thursday, the Goldman family published a book about the killings that Simpson had written under the title, "If I Did It," about how he would have committed the crime had he actually done it. After a deal for Simpson to publish it fell through, a federal bankruptcy judge awarded the book's rights to the Goldman family, who retitled it "If I Did It: The Confessions of a Killer."

"He brings attention to himself every time we turn around and he will continue to do that forever," Goldman said Friday on NBC's "Today Show."

The Las Vegas district attorney's office will decide whether to pursue charges in the casino case, but had not received police paperwork by Friday morning, an office assistant said.

Simpson had been scheduled to give a deposition Friday in Miami in a bankruptcy case involving his eldest daughter. But it was rescheduled because Simpson had told attorneys that he would be out of town.

The Palace Station, an aging property just west of the Las Vegas Strip, is one of several Station Casinos-owned resorts that cater to locals. The 1,000-room hotel-casino, with a 21-story tower and adjacent buildings, opened in 1976.

A company spokeswoman did not immediately return a call for comment.

TrackBack URL for this entry:
http://gaysocialites.blog/cgi-sys/cgiwrap/cwinters/managed-mt/mt-tb.cgi/2265