« The Emmy's give Britney Spears a chance to apologize | Main | Here's proof that Christina Aguilera is pregnant! » 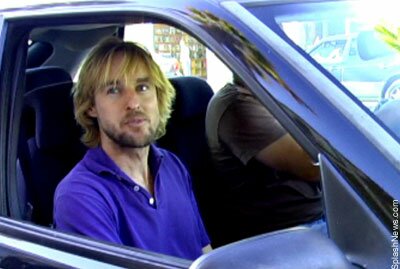 The New York Post published these photos on Saturday after fans and paparazzi caught Owen Wilson out and about in Los Angeles this week.

This is Owen's first appearance since being released from the hospital following his suicide attempt.

Wilson nodded to photographers as they took pictures and wished him well in his recovery.

While Owen looked happy, relaxed and toned, the red slash across his arm reminds us of a troubled Wilson who recently tried to take his own life.

Despite everything, friends say Owen is ignoring advice to check into a rehab facility.

“(Owen) doesn’t think he really has a problem,” an insider said.

Instead of rehab, we're told Wilson is planning a cross country road trip with a sober sponsor.  Rehab on the go, if you will.

Owen, come see us in Indy and catch a Colts game. The weather is beautiful and the leaves will be changing soon. Great places to camp too in Indiana (and Kentucky!, by God, you must go to Kentucky on your trip - it's gorgeous this time of year in the country)...if you are into that. Gotta lose those paparazzi though, they would make it tough. But, we'll give you your peace and quiet out here...you can be assured of that. Hang in there. You look great.

i've had 2 people in my family commit suicide. my aunt attempted several times. my uncle surprised us all. you can't assume to know what is going on in owen's head. only he knows. only he truely understands. only he knows if he'll try again. i hope not. i really enjoy watching him on the big screen. he's handsome and charming. but that is an ACTOR!!! that is not who he really is. all the money in the world won't make you happy. it sounds cliche, but it's true. owen, i hope you find peace. true, solid, genuine peace that's going to fill your soul and bring a REAL smile to your face. and may your scars bare a reminder that the brother who saved you loves you and needs you to live. as well as the rest of your family. forget hollywood. forget your fans. but live for the people that truely love you and who would truely miss you. your family.

VERY well said Jennifer. Thank God I have never had to deal with a suicide, but I can imagine the guilt and pain it would cause those left behind. Always wondering if they could have prevented it or why they didn't see the signs in time - in spite of the fact that they are not in any way at fault. Even if the person survives, there is much residual shock, hurt and fear that their loved one will try it again.
I feel for Owen too - living with emotional pain is often much harder than living with physical pain. I truly hope he finds happiness and inner peace.

TrackBack URL for this entry:
http://gaysocialites.blog/magazine-mt/mt-tb.fcgi/2272