Reese and Jake are over AGAIN! 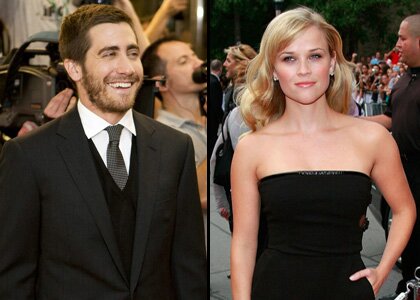 Reese Witherspoon and Jake Gyllenhaal have kept their entire relationship on the down low, so seeing them avoiding each other in public isn't that unusual.

However, now Us Weekly is reporting that Reese and Jake are done for good.  We've heard that one before, haven't we?!

“This is the harshest split they’ve had,” a source tells Us. “Reese told Jake it’s best they don’t talk at all.”

It’s no secret Reese Witherspoon and Jake Gyllenhaal aren’t into PDA. But their behavior at the Toronto International Film Festival on September 7 was cold even for them. There’s good reason: After six months of on-and-off dating, the pair are kaput. “This is the harshest split they’ve had,” a source tells Us. “Reese told Jake it’s best they don’t talk at all.”

Indeed, the costars stood apart and rarely made eye contact at the Rendition press conference. They remained distant at the afterparty, where Witherspoon kept to herself and Gyllenhaal chatted with his mom and costar Peter Sarsgaard (sister Maggie’s beau). But by 11 p.m., when they hit the fete for George Clooney’s movie Michael Clayton, the frostiness melted: “They seemed like a couple,” an eyewitness tells Us. “Reese was happy and having a good time.”

But the next morning, they left Toronto separately. She headed to L.A.; he flew to NYC.

Is it over for good? “They’re a rocky couple,” says one insider. “It would not be a shock if they got back together.”

For more inside scoop on your favorite celebrities, pick up the new issue of Us Weekly, on newsstands this week.

TrackBack URL for this entry:
http://gaysocialites.blog/cgi-sys/cgiwrap/cwinters/managed-mt/mt-tb.cgi/2259