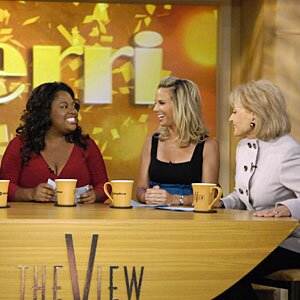 For the first time since Star Jones and Meredith Vieria left the View, there are once again 5 co-hosts.  Joy Behar, Barbara Walters, Elisabeth Hasselbeck and new moderator Whoopi Goldberg will now permanently be joined by Sherri Shepard.

It was really no surprise when Babs introduced Sherri as the new co-host.  Even Barbara Walters said it was the "worst kept secret" ever.

"I am so happy that Sherri Shepherd is joining our panel," said Walters, also an executive producer, in a statement. "She is irreverent, charming, funny and lovable."

For those who Viewers who didn't know Sherri, they put together a cute little video bio that included the following:

Shepherd, who began her career moonlighting as a stand-up comic while toiling by day as a secretary, got her first big break in the short-lived 1995 TV comedy "Cleghorne!," and later starred for four seasons on ABC's "Less Than Perfect." She also has appeared on such shows as "Friends," "Everybody Loves Raymond" and "The Jamie Foxx Show."

Her film credits include "Who's Your Caddy?" "Beauty Shop" and "The Wedding Bells."

From what I understand, there will be five co-hosts on two days each week and only four gals on the other three days.  It's a good thing Barbara won't be there every day, because that table is not big enough for all those women.

Boy, she started her gig w/a chip on her shoulder. She seemed pretty mad that there were white people around her throughout her life. She seemed recentful that she wasn’t asked back on a sitcom. Honey, that’s show biz. You got a big break. Enjoy it. Lose a couple of lbs., you’re in a glam city now. I could have sworn I was listening to Star Jones.(I have one of those tv radios @ my desk, so no visuals.)But with half the glamour, or flamboyance and 1/4 the brains as her.

I think they all got along great, maybe some of them hid real emotion but all in all good show.

TrackBack URL for this entry:
http://gaysocialites.blog/cgi-sys/cgiwrap/cwinters/managed-mt/mt-tb.cgi/2233