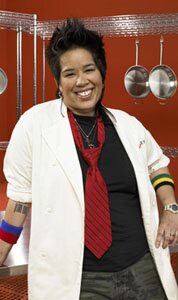 A former contestant on Bravo's Top Chef Josie Smith-Malave was the victim of gay bashing over the Labor Day weekend.

Josie, a lesbian who was featured on Season 2 of the reality channel show, was among a group of women asked to leave a Sea Cliff bar over Labor Day weekend according to her lawyer Yetta Kurland.

Evidently, about 10 young people followed the women out of the bar and began screaming anti-gay slurs, spitting on them and then beating them, Kurland said.

Smith-Malave and the women had been in Long Island, New York to attend a friend's birthday party.  Josie suffered several bruises, and one of the other women received injuries to her head. One of the women had a camera stolen in the attack.

Josie is openly gay, but her sister, who is straight, was also beaten.

Smith-Malave, a Miami native, is a former sous-chef for Marlow and Sons restaurant in Brooklyn. She has played for the New York Sharks of the Independent Women's Football League.

I encourage people to call the bar as I did and ask them why they are encouraging assaults against women:

Partners, a Sea Cliff Bar, where women get beaten, spit on and robbed without consequence.

Do we know specifically what behavior was behind the decision to ask these ladies to leave? Sometimes, heterosexuals engage in inappropriate behavior requiring 86ing, too. Do we know who started the confrontation and who said what to whom and in what order? Do we know who escalated the altercation to the physical level? People of all persuasions go to bars, get drunk, say and do stupid stuff and make bad choices. Even if these women were indeed the victims of discrimination, could it be that they said something to provoke the idiots who ended up attacking them? However unfair they were treated, could they have made better choices? Choosing to become involved in a physical altercation is usually a bad idea. They could have left quietly, then sued. Hit folks in the wallet, is how grown-ups address their grievances. I have very little sympathy for barroom brawlers, whatever the subject of the disagreement.

TrackBack URL for this entry:
http://gaysocialites.blog/magazine-mt/mt-tb.fcgi/2242