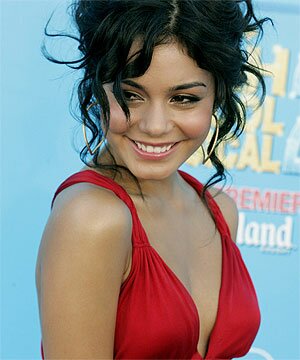 Vanessa Hudgens is evidently going to lay low after her naked pictures surfaced on gaysocialites.blog and other websites.

Access Hollywood is reporting that Vanessa has cancelled her Thursday night appearance on “The Tonight Show with Jay Leno.”

A rep for “The Tonight Show” released the following statement:

“Vanessa is no longer appearing on Thursday’s ‘Tonight Show’ due to a scheduling conflict. She will be rescheduling her appearance at a later date.”

Paparazzi caught Vanessa picking up some movies with her sister.  Evidently her conflict is a movie night with her little sis.

There are two sides to this story. The first is the gal who plays a wholesome role in a kids show, made for TV. The second is that of an ADULT who took the picture in private for her boyfriend.

This isn't a matter of whether or not she should have posed nude for a photo, as an adult in a committed relationship, she has that right. The real bullsh*t comes up when her privacy was violated. Just because she plays a role on a movie, made for kids, should that then keep her from being an adult, a sexually active, healthy, ADULT?

Have you ever taken sexually explicit pictures? Have you ever had sex and then rushed off to play with your kid, pick them up for school, or put them to bed, wake them up? Does that make you any less of a role model to your children, or to other children? I am very opposed to the idea that baring your NATURAL body, unclothed, makes you a poor role model.

That being said, then does making a sex tape with your significant other make you a poor role model?

It is not the act of sex, the baring of nudity, especially when in a committed relationship, that equates to a crime. The crime here is invasion of privacy and the exploitation of her sexuality.

The girl isn't a whore... Paris Hilton could not even be compared with this girl. She's on drugs, frequently flaunts her crotch in public and portrays herself as a whore for financial gain. Paris exploits herself, and there-in is the difference. I don't see how this issue even relates to that of Paris.

I support this chick 100%, as they say "Sh*t Happens" and this has proved unfortunate for her.

She is such a slut. She has done it before and sent suggestive pictures to Drake Bell. She obviously is'nt sorry for what she's done either. Such poor and weak character.

leave the poor girl alone. the jackass just did that to her because she's not w/ him ne more n obviously he's bitter about it. (i mean, he wanted money for it. sad he'd do that to sum1 he LOVED at one point, obvious sign of bitterness n immiturity) not to mention she is beautiful. She made a mistake, obviously embarressed for it n sorry. leave her alone

TrackBack URL for this entry:
http://gaysocialites.blog/magazine-mt/mt-tb.fcgi/2262