This morning's wake-up call is all about the rappers.  While the women are serving hard time, the men are arguing like queens! 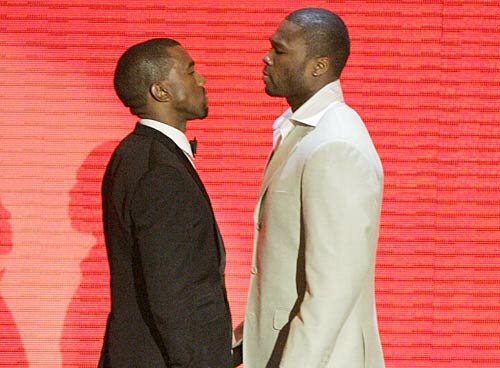 [OH, MA! 2 NEW RAPS ON HIP REMY | New York Post]- The trouble keeps piling up for Remy Ma.  She's already in trouble for shooting her friend in the stomach, but now Ma is at it again.  This time she's in trouble for sending her boyfriend after the same friend's boyfriend.  I know it sounds pretty juicy.  The judge declined to slap more bail on her, but that doesn't mean she won't get more than a slap on the wrist later.  Remy already faces up to 25 years.

[Manager Says Foxy Brown Not Pregnant | Associated Press]- Despite what her lawyer said in court, Foxy Brown won't be giving birth while in the click.  Her manager says she isn't pregnant at all.  While she may not get a child behind bars, her 'people' hope she makes a few bucks.  They're releasing a new album.

[Kanye Leads 50 Cent in CD Sales Face-Off | AM New York]- While Kanye West and 50 Cent continue to flood the media talking smack on each other, it looks like Fiddy will be calling it quits soon.  If the rapper keeps his promise, 50 will have to retire on Sunday IF Kanye keeps his lead in record sales.  Meanwhile, the two rapping hard-hitters are fighting like queens!

TrackBack URL for this entry:
http://gaysocialites.blog/cgi-sys/cgiwrap/cwinters/managed-mt/mt-tb.cgi/2248