« Kid Rock scuffles with Tommy Lee at VMA's | Main | Could these be Rosie's rants about Trump in her new book? » 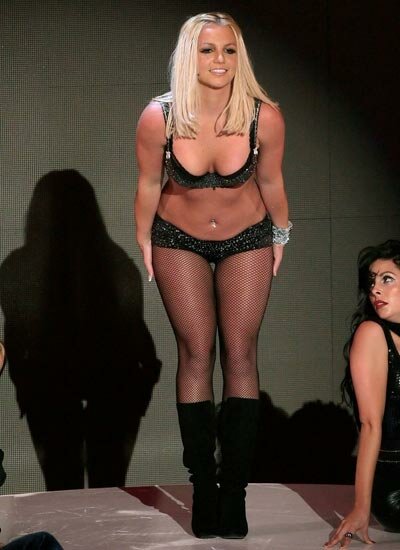 If you thought Britney Spears' "comeback" performance that opened the Video Music Awards sucked as badly as I did, you may not be alone.

Evidently the reason Britney looked so unprepared and enthusiastic about her performance was because the Palms Hotel Casino and Resort pulled the plug on her magic show planned with Criss Angel.

Breatheheavy.blog is reporting that Britney and Criss had a pretty spectacular performance planned.

Britney Spears was to perform under the magic of Chris Angel... but MTV freaked out at the last minute finding out what Britney was actually going to do.

Supposedly, what Britney and Chris were planning was to do a set of mirrors and flotation. But when told to the Palms Hotel/Casino... the hotel flipped.

Britney's original performance was to infact appear and disappear. To float through the air... and for much mature dancing.  (sic)

Regardless, Britney obviously never planned on singing live.  She didn't even seem to know the words.  I will give credit where credit is due, but I think I would have had a "plan B" if I was planning my only chance at a comeback.

The back-up dancers seemed to know what they were doing.

i don't buy it either

Ugh, what a fat bitch.

well this certainly explains a sh**load. it was just really sad to watch it, unflattering costume for her new mommy-belly, her apparent unenthusiasm thorought, and wondering why everyone else up there (dancers, acrobats) were far more on top of their game than she was. it was almost painful to watch.

but i STILL don't know if i should return to my former love for her. she *used to be* an amazing performer IMO : )

yeah well. whatever. she has done a lot more than ANY of us have, while we sit on the sidelines and judge her. we have the easy role. meanwhile, she has had criticism from all angles, which is probably not an easy thing to deal with, especially as a young individual. we should be more supportive, and less of "fair weather fans." after all, she has brought us great music...and yet, we're so quick to call her a "fat bitch" or point at her "mommy belly." hi, she's had two kids. if you have had two kids, the most inspiring thing you're probably doing is calling jenny craig for your next 7 day meal installment, versus showing your face on mtv, debuting new tunes. give me a break people. no, give her a break.

She's had PLENTY of 'breaks' Jenny. You're so fucking deluded you'll be giving her a break as she's stabbing you to death...

TrackBack URL for this entry:
http://gaysocialites.blog/cgi-sys/cgiwrap/cwinters/managed-mt/mt-tb.cgi/2220