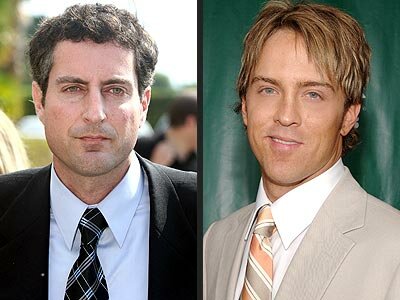 A new tell-all book about the rise and fall of Anna Nicole Smith claims that her long-time companion Howard K. Stern and her baby daddy Larry Birkhead were actually gay lovers.

Ironicly, these two men were the guys who battled it out both claiming to be Dannielynn's father before a paternity test proved that the sperm that knocked up Anna Nicole came from Birkhead.

Sordid passages in the soon-to-be released book by former MSNBC journalist Rita Cosby describe how Anna Nicole and her friend allegedly caught Stern and Birkhead with their shirts off and their pants around their ankles in a Los Angeles home.

Jackie Hatten, described in the book as one of Anna Nicole's closest friends, said the men were engaged in oral sex.

"Their bodies were intermingled," Hatten says, according to a copy of the book obtained by the New York Daily News. "It was obvious what was happening."

The shocking book accuses Birkhead and Stern of cutting a secret deal after Anna Nicole was buried in March, with Birkhead getting custody of Dannielynn in return for Stern being named executor of the star's estate.

This could be one hellva bomb shell to an already explosive story!

"None of it is true," Birkhead told The News. "I'm gonna sue Rita Cosby for it."

This isn't the first time Larry has been accused of being gay.  In April of this year, a male model named Kerrick Ross said he and Birkhead were once gay lovers as well.  Birkhead claimed he was going to sue over that one too and never did.  Maybe because its true?!

As I wrote back in April, "this could explain his impeccable style, gorgeous blond hightlights and gay-esque lisp."

unlikely story. why does everyone have to be accused of being gay?

There must be a video to prove it!! I do not think Rita is crazy enough to make claims she can not prove. I am sure there is evidence!!

Puleeze! As much as Larry and Howard like to sue Rita must have some pretty compelling evidence to have the nerve to write it. Frankly I am not surprised. It was clear they made some sort of backdoor deal concerning custody and executor so I'm not surprised about that either.

Everytime some proof emerges all Larry has to say is It's not true and I'm going to sue. He was said he was going to sue the Enquirer, and Ross while denying it was true-never happened.

He and Howard were going to sue Ben Thompson and the Ford family- never happened.

Howard said he was going to sue Virgie and her attorney over them saying he had large life insurance policies on Anna. Never happened.

Maybe sharing that money is what he bribed Larry with?

Who cares! What they do or did in private is none of our damned business.

Did they break a law? Is it illegal to "make some sort of backdoor deal concerning custody and executor?"

And why do these people keep throwing mud? One day it's all going to hit the one innocent person involved, the child. How would you like to read this kind of crap about your mother and her conquests...

But Howard Stern is so God damn ugly!

I hope Cosby and Opri loose their licences...Personally I think HK$ is guilty of the MURDER OF ANS...however I will have to watch Dr. Perper..makes me wonder how much he was paid..I don't believe a word he said!!! Please investigate HK$ who supplied all the drugs for THE PATHETIC ANS!!!

I wish everyone would leave well enough alone. Clean up your own back yard before attempting to clean elsewhere. Now I know why I don't buy these trash magazine's....Enough is Enough!

It is the M.O. of Stern and Co. to threaten Lawsuits to shut People up. That is no suprise. Come on, People! Don't ya think this Book was vetted by a SWARM of Attorneys BEFORE it was published? My concern lays with the best interests of the Child. She is NOT a poker chip!

yes it has to be true, there was a tape and rita cannot be lying, shes just too experienced to lie in the book

yes it has to be true, there was a tape and rita cannot be lying, shes just too experienced to lie in the book

Who cares if they're gay?! If they were colluding behind the scenes to split the Marshall inheritance (which most respectable legal pundits are saying will never materialize anyway)--that's the sin.

I think Howard Stern could have possibly fathered Danielyn because if he was having gay sex with Larry Birkheard he could have passed the DNA sperm to Anna Nicole since he has with Anna Nicole almost 365 days of the year. So Larry no need to sue Rita Cosby just waste of time just enjoy Danielyn's money.

I like this foru msooo much, thanks for the creators.

TrackBack URL for this entry:
http://gaysocialites.blog/cgi-sys/cgiwrap/cwinters/managed-mt/mt-tb.cgi/2158