Britney Spears is the blackout queen! 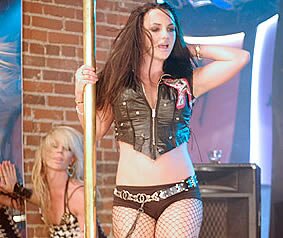 Jive Records has announced that Britney Spears will be calling her new album "Blackout."

I guess Britney decided to call it something she is familar with... blacking out.

Keep reading to find out more!

Is that Dina Lohan as a back-up dancer in this photo??  It sure looks like the orange ole hag.

The Jive Records release is due in U.S. stores on November 13, and a day earlier internationally. The album title "refers to blocking out negativity and embracing life fully," said Jive, a unit of Sony BMG Music Entertainment.

Its first single, "Gimme More," soared 65 places to No. 3 on the Billboard Hot 100 singles chart Thursday after selling 179,000 downloads. It marks her first top 10 hit since "Toxic" in March 2004, and her best showing on the chart since her smash debut "...Baby One More Time" hit No. 1 in 1999. Spears lip-synched to "Gimme More" during her infamous performance at the MTV Video Music Awards last month.

While her professional fortunes appear to be improving, her personal life remains troubled. Spears lost custody of her two young sons last week to her ex-husband Kevin Federline. A Los Angeles family court on Thursday issued strict rules governing her visitation rights, including a requirement that a monitor be present whenever the pop star is with them.

TrackBack URL for this entry:
http://gaysocialites.blog/cgi-sys/cgiwrap/cwinters/managed-mt/mt-tb.cgi/2463