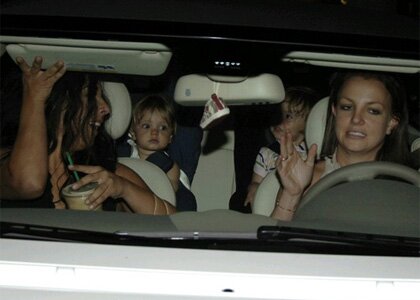 Britney Spears has officially hit rock bottom.  A Los Angeles judge took her kids away from her on Monday!

Kevin Federline's attorney Mark Vincent Kaplan took his case to court again, this time to issue a complaint that Britney was driving her kids around without a valid driver's license.

The plan evidently worked.  Britney has until Wednesday to turn the kids over to Federline.  According to X-17 Online, Britney has already passed the kids off to Kevin.  I guess they won't get in the way of her partying any more!

Sean Preston, 2, and 1-year-old Jayden James Federline will remain with their father until further notice.

TrackBack URL for this entry:
http://gaysocialites.blog/cgi-sys/cgiwrap/cwinters/managed-mt/mt-tb.cgi/2429