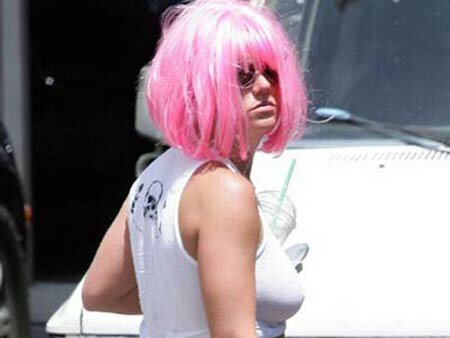 Britney Spears agreed to talk with Ryan Seacrest on his radio show this morning, and in typical Britney-style... it was chaotic to say the least.

Seacrest called up Spears' assistant/ friend Alli Simms who did most of the talking while Britney snoozed.

Here are some highlights from the interview:

Ryan- On her album?
Alli- Britney was really excited cause she’s been working so hard on this album.

Ryan- Have you been with her the last couple of months?
Alli- She's doing good and she’s doing a lot of great things and I'm really proud of her

Ryan- How does she balance personal life and career?
Alli- Take it one thing at a time and try not to pay attention to all of the negativity

Then Britney finally rolled out of the bed to deliver this performances:

Ryan- What’s happening? How did the release of the new album feel?
Britney- It was really laid back

Ryan- Did you celebrate?
Britney- No, just watched movies.

Ryan- We is she gonna do the rest of the week as far as promotion of her new album?
Britney- “this is it” insisting that Ryan Seacrest’s morning show is the album promotion she will be doing.

Ryan- Which track has the most meaning to you?
Britney- Heaven on Earth-its different from all the songs

Ryan- How much does the overwhelming coverage get to her?
Britney- “You just try to have to do what you do and try to avoid the coverage.”

Ryan- Court dates and kids?How do you respond to what people say about her?
Britney- Let people say what they want and do what they do. Its sad how cruel people can be and you just gotta ignore it.

What happened to this girl?!  Did Team Britney quit?!

It seems to me like Brittney is blowing a fantastic chance for a comeback. She has the notoriety to do big things, but by turning down partnerships with people like Justin Timberlake and Timbaland, blowing off interviews like this, and half-assed performances like the VMAs - nothing is going to come from it. I'd even go as far as to say that she's talented, but again isn't going to do anything with it. What a shame! Any straight guy who is 20-30 years old remembers the "Hit Me Baby One More Time" video quite fondly...Let's bring that Brittney back.

TrackBack URL for this entry:
http://gaysocialites.blog/cgi-sys/cgiwrap/cwinters/managed-mt/mt-tb.cgi/2706