« Barack Obama and Dick Cheney are related! No joke! | Main | Clay Aiken is coming to Broadway » 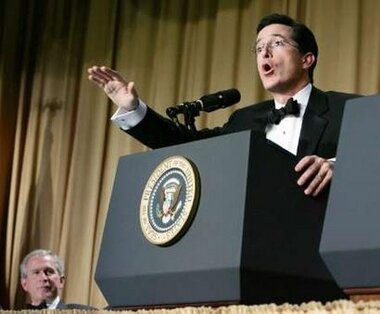 Stephen Colbert is throwing his hat into a crowded presidential race, but the details on how the satirical comedian will seek the highest office in the land are a bit fuzzy.

Colbert announced his candidacy for president on "The Colbert Report" on Tuesday night.

"I shall seek the office of the President of the United States," announced Colbert on his Comedy Central show, as balloons fell around him.

Colbert has often said he isn't read to say whether or not he is running for president even when he wasn't promoted.

His recent best-seller, "I Am American (And So Can You!)" afforded him the opportunity to mock the now-standard approach to a White House run, complete with a high-profile book tour.

The Comedy Central host has often rallied his fans, "Colbert Nation", encouraging them to vote to have a Hungarian bridge named after him or to vandalize Wikipedia.blog with his version of "truthiness" and "wikiality" among other things.

How far the mock conservative pundit planned to stretch his impression of a presidential candidate wasn't clear.

Colbert planned to get his name on the primary ballot in South Carolina, where the comedian is originally from. Earlier this week, South Carolina public television station ETV invited Colbert to announce his candidacy on its air.

When recently asked what party affiliation he would adopt if he tossed his hat in the ring, Colbert replied: "Both. I can lose twice."

oh goody - another comedian for fckin president. how fckin american!

if hillary clinton doesn't win the nomination, i would vote for colbert over any republican

TrackBack URL for this entry:
http://gaysocialites.blog/magazine-mt/mt-tb.fcgi/2544