Dancing with the Stars: Marie faints, Mark falls out 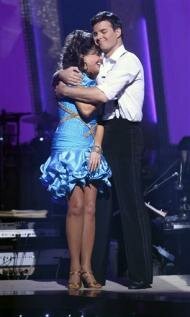 On Tuesday night's Dancing with the Stars results show, Marie Osmond explained why she fainted the night before blaming an "accumulation" of factors including allergies and poor air quality.

"I noticed when he [Jonathan Roberts] spun me a couple of times, I kept spinning," Osmond told the show's host Tom Bergeron. "And then I kept missing hip bumps. I could tell something was funky."

Marie seemed okay after the dance and confident enough to bounce around while waiting on feedback from the judges.

"Remember when I was jumping? I was trying to wake my head up. I don't know what happened," she said.

"With all sincerity, I'm a jokester. After 40 years in this business, you can take spins in many directions," Osmond said.

Her fainting spell didn't seem to hurt Osmond and Roberts, instead it was Billionaire Dallas Mavericks owner Mark Cuban and his partner, Kym Johnson who got the boot.

A much thinner Mark Cuban thanked the crowd and walked away from Dancing with nice things to say about the experience and his competitors.

"I gained so many new friends, I've gained such an appreciation for the effort that everyone puts in. It's been such an amazing experience. I wouldn't have traded it for the world," Cuban said.

Dancing with the Stars airs on Monday and Tuesday nights on ABC.

TrackBack URL for this entry:
http://gaysocialites.blog/magazine-mt/mt-tb.fcgi/2637