Everyone wants Britney Spears on tape! 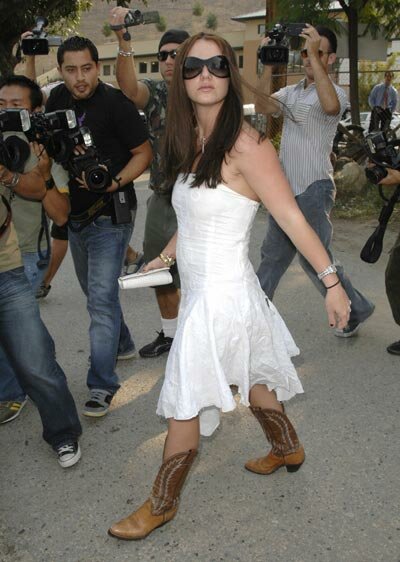 Britney Spears seemed more like a film star than a musician Friday as everyone wanted her court appearance on tape.

Sources from inside the court room say that Kevin Federline's attorney Mark Vincent Kaplan wanted Brit's testimony taped, because they say that what she says is just as important as how she says it. Evidently the "Gimme More" singer's last deposition seemed sincere even though it was packed full of Britney-style sarcasm.

TMZ has been at the center of this and all of Britney's court cases.  Their lines even crossed with K-Fed's request to record Spears' deposition.

Spears' lawyer, Thomas Dunlap, argued against the recorded statements out of fear that they might end up on the online tabloid.

"I am deeply impressed by the investigative work of the media, although I think it's a little stretch of their talent," Commissioner Gordon said.

In summary, Britney's Friday morning court appearance was all about the videotape.

Britney was scheduled to appear in court around 4:30pm EDT to fight for custody of her two sons, Sean Preston and Jaden James.

The pap, need to get a real life. Britney looks really good in this picture!

TrackBack URL for this entry:
http://gaysocialites.blog/cgi-sys/cgiwrap/cwinters/managed-mt/mt-tb.cgi/2656