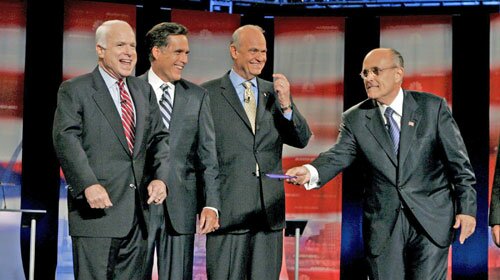 Fred Thompson made his presidential debating debut on Tuesday evening as he went head to head with his fellow republican White House contenders.

This was Thompson's first chance to make a real impression on voters having just entered the race, and the actor turned politician isn't getting the best reviews.  Most critics, both democrats and republicans, say Fred bombed.

The nine Republicans gathered to mainly discuss economic issues but was dominated by fireworks between former New York Mayor Rudy Giuliani and former Massachusetts Gov. Mitt Romney. The two leading Republican candidates attacked each other over tax policies and spending.  Hillary Clinton's name was mentioned as much as, if not more than, most of the republican candidates.

TrackBack URL for this entry:
http://gaysocialites.blog/magazine-mt/mt-tb.fcgi/2480