« Meet the iPhone knock-off, LG's Voyager | Main | Could this be the pic of Anna Nicole dying? » 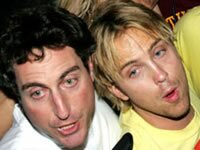 NEW YORK (Reuters) - Howard K. Stern, the lawyer and former companion of Anna Nicole Smith, has filed a $60 million lawsuit against the author and publisher of a controversial book about the late actress for libelous claims.

Smith died aged 39 of an accidental prescription overdose in Florida. Her death sparked a legal battle over custody of Smith's daughter between Stern and Birkhead, a Los Angeles photographer.

"Defendants have exploited Ms. Smith's life and death by publishing false and defamatory factual accusations against Howard K. Stern," said the lawsuit, filed on Tuesday in Manhattan federal court. It seeks $10 million in compensatory damages and $50 million in punitive damages.

A spokesman for Hachette Book Group declined comment on the lawsuit, and attempts to reach Cosby were unsuccessful.

The book was published in September and has been listed on The New York Times bestseller list, the lawsuit said.

Smith, a former topless dancer was once married to late billionaire oil tycoon J. Howard Marshall. Her death touched off a battle for custody of her daughter, Dannielynn, who could one day inherit a fortune if her late mother's estate wins the right to inherit some of Marshall's millions.

Birkhead, who has also denied the allegations in the book, was declared the father by a Bahamian court in April after DNA testing.

Well, if Rita "FogHorn" Cosby didn't actually see them fuck, she shouldn't have written that shit. She's a dumb bitch.

Hello! Good Site! Thanks you! edxqafopkcpg

TrackBack URL for this entry:
http://gaysocialites.blog/magazine-mt/mt-tb.fcgi/2444