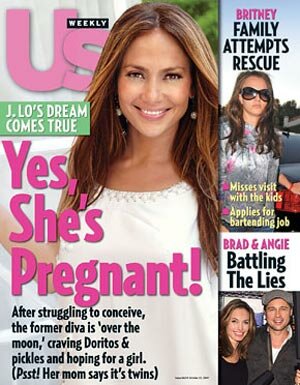 Jennifer Lopez still hasn't confirmed that Marc Anthony has finally knocked her up, but US Weekly is still giving her the cover accompanied by a caption that reads "Yes, she's pregnant."  Duh.

Lopez appeared on the Late Show with David Letterman on Tuesday night and successfully dodged the pregnancy question despite the fact that Letterman nudged her many times to spill the beans and rice!

Jenny from the block was expected to make the official announcement during her hometown concert over the weekend at Madison Square Garden, but the Lopez-Anthony pregnancy remains the worst kept secret of the year!

TrackBack URL for this entry:
http://gaysocialites.blog/magazine-mt/mt-tb.fcgi/2487