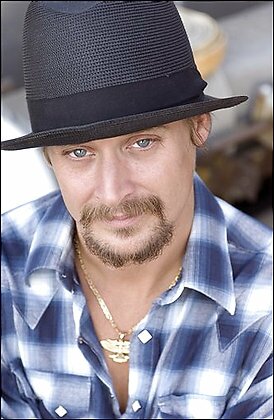 Kid Rock has done it again!  This time the disturbed rocker got arrested for assaulting someone at a Waffle House.

Evidently on Sunday morning Rock and some stranger got in a fight over a woman in the Waffle House parking lot.  It doesn't get more redneck that that folks.

Kid Rock, born Robert Ritchie, kicked the guys ass and hoped on their tour bus before they were pulled over later and arrested on a simple battery misdemeanor charge.

Kid and the boys spent about 12 hours in the DeKalb County Jail before getting released on bond.

What self respecting redneck would not throw down and defend his honor in the presence of skanks at the Waffle House? This is so white trash but great media exposure for Kid Rock. He has a new album to pimp and news like this reinforces his "badass" monicker among his fans.

TrackBack URL for this entry:
http://gaysocialites.blog/magazine-mt/mt-tb.fcgi/2600