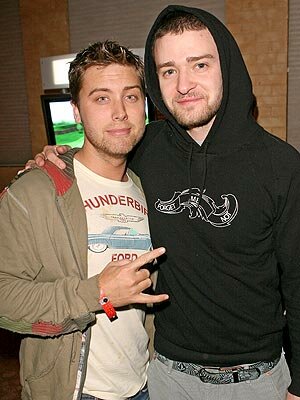 Lance Bass is such a queen!  The Digital Spy is reporting that Lance once thought his former bandmate, Justin Timberlake, was gay.

Evidently JT once told his fellow NSYNC'ers that he dreamed of playing a gay man in a film.

"We thought Justin was gay because he told us he wanted to do a gay part in a movie," Bass said.

Justin isn't the only member of NYSNC that Lance is trying to drag out of the closet.  Bass also said he thought Chris Kirkpatrick was gay at one point, because "he used to hang out with a choreographer".

Leave it to the boy band queen to want everyone else on his team too!

The only queen here is you, for not realizing that Bass was actually being sarcastic.

Did you even read the original GQ article? I'm guessing no.

who cares about the interview dude? he shouldn't be talking about everyone else's personal lives, because little homo lancey got mad when everyone else talked about his. eye-for-an-eye.

Frankly, I'm a little surprised that Lance is the only one in nsync (or backstreet or 98) that has come out. I was expecting several others.

I frankly don't care what anyone who isn't with me is doing in there bedroom (unless kids are involed)....but since when did hanging with a choreographer or wanting a gay part in a movie automatically make you gay? I'm not saying that they can't be, but if thats all...who cares?

this part is probably taken out of context, but it doesn't make Lance sound good.

Lance is a total bottom queen. He has a huge crush on both Chris and Justin. Lance is miserable and misery loves company.

TrackBack URL for this entry:
http://gaysocialites.blog/cgi-sys/cgiwrap/cwinters/managed-mt/mt-tb.cgi/2593