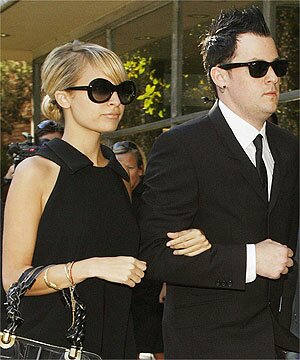 Lionel Richie is going to be one hell of a grandfather.

The singer is evidently buying his adopted socialite daughter Nicole Richie a mansion so that her unborn baby can grow up in style.

Lionel is reportedly spending $7 million dollars for a villa in Century City for Nicole and her baby daddy Joel Madden.

"She recently leased out her West Hollywood condo, and, while she likes living at Joel's bachelor pad in Glendale, she doesn't want to raise her baby in the Valley," a source said.

"Nicole wants to live close to both of her parents while she gets ready to have the baby. Lionel wants Nicole to be safe, and he thinks a gated community is best."

I mean, who wants to raise a baby in the Valley?!

OBVIOUSLY! (The Valley is actually more like, Harlem, and is *not* like in the movie at all).

TrackBack URL for this entry:
http://gaysocialites.blog/magazine-mt/mt-tb.fcgi/2555