No settlement in Britney's hit-and-run case 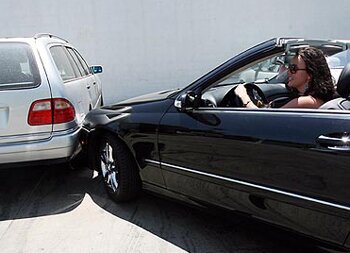 Contrary to popular belief, Britney Spears is not off the hook in her hit-and-run case.

Reports earlier this week said that Spears had reached a settlement with the owner of the Mercedes she dinged right in front of the paparazzi, cameras and all.  Crazy Britney didn't even leave a note, y'all!

It probably won't happen too soon, Britney's attorney is going on vacation next week.

Britney Spears' lawyer, J. Michael Flanagan, tells CelebTV.blog Friday that no financial agreement has been reached with the owner of the car damaged in Spears' hit-and-run accident.

Flanagan says, "I think it’s about $1000 worth of damages, and it will most likely be taken care of."

However, with Flanagan on vacation next week, a speedy settlement is not likely. When asked who will be handling this case in his absence, Flanagan explains, "Nothing is going to get done if I don't do it."

Kim Robard-Rifkin, the owner of the 1999 Mercedes-Benz station wagon that Spears hit Aug. 6 in a San Fernando Valley parking lot, validates the story.

Robard-Rifkin tells CelebTV.blog Thursday, "Absolutely no settlement has been reached. I have been in phone conversations with Britney's attorney discussing a settlement, and I have received a few estimates on damages."

She adds, "We've [Flanagan and Robard-Rifkin] discussed paying for a rental car, but so far, nothing has been finalized."

Spears was issued a California license on Oct. 2. She is due in court next to discuss this case Oct. 25.

When we have bigger problems in this world, why would everyone rather follow Britney Spears around knitpicking at her pathetic life?

TrackBack URL for this entry:
http://gaysocialites.blog/cgi-sys/cgiwrap/cwinters/managed-mt/mt-tb.cgi/2591