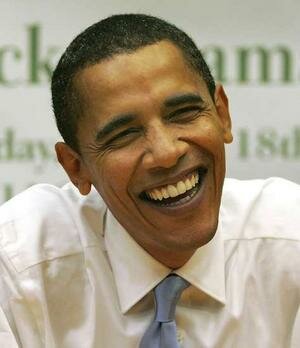 Presidential candidate Barack Obama is finally ready to debate with democratic front runner Hillary Rodham Clinton.  Even Hillary isn't there to debate back, Barack unloaded on her on late night TV.

Senator Obama was on Wednesday night's "The Tonight Show with Jay Leno" and he took a few jabs at Senator Clinton.

“Hillary appears to be a shoo-in,” Jay Leno said, adding: “How discouraging is that?”

“Hillary is not the first politician in Washington to declare mission accomplished a little too soon,” Mr. Obama said.

“So we’re – we’ve got a long way to go before the first vote is cast, but we do this every year, every election. Four years ago, you know, President Howard Dean was coronated, and that didn’t work out. And so really until those folks start going into the polling place, these races end up being very fluid.”

Leno also asked Obama if he felt like former President Bill Clinton was a help to his wife's campaign for the White House.

“There’s no doubt that that helps Hillary’s campaign.”

“If there’s a debate between Michelle and Bill, you know, I’m putting my money on my girl,” Barack Obama joked.

“You would leave your wife alone with Bill Clinton, would you?” Leno asked. “You want to rethink that?”

Mr. Obama replied, “Michelle can handle herself. She doesn’t flinch.”

Jay Leno also asked Obama about the recent discovery that he and Vice-President Dick Cheney are actually related.

“How about that?” Barack said. “Yeah. Not kissing cousins.”

“The truth is I am OK with it. You know, now I don’t want to be invited to the family hunting party.”

Obama trails Clinton by double digits in most national polls.

TrackBack URL for this entry:
http://gaysocialites.blog/magazine-mt/mt-tb.fcgi/2557