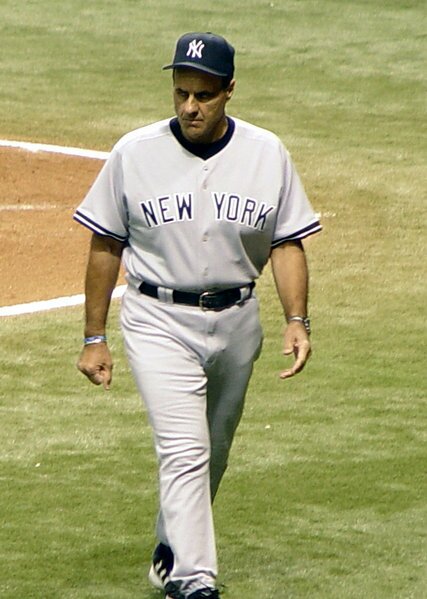 If you care about sports, CBS 2 in New York is reporting that Joe Torre has turned down an offer taking a pay-cut for next season making Torre the FORMER manager of the New York Yankees.

New York Yankees manager Joe Torre rejected a contract offer to return in 2008, CBS 2 HD has learned, a decision that will likely send shockwaves through a large majority of the Yankees fan base who have voiced their desire to keep the beloved manager for another season.

Torre was offered a one-year contract believed to be worth $5 million with an option for 2009.

The Yankees said a search for a successor is already underway. The list of candidates will almost certainly include bench coach and Yankee great Don Mattingly and 2006 N.L. Manager of the Year Joe Girardi.

"It is now time for the New York Yankees to move forward," Yankees President Levine said. "We thought it was very fair. It clearly was at the top of the market, but we respect Joe's decision."

Levine admitted he was not surprised Torre turned down the offer, despite many fans hoping he would return to at least finish his career in pinstripes during the Yankees' final season at Yankee Stadium.

Torre had guided the Yankees to the playoffs every season since he began managing the squad in 1996, including winning four World Series titles, a reason that undeniably led to the team wanting him to return.

General Manager Brian Cashman personally flew from Tampa, where the team's organizational meetings were being held, to New York so he could bring Torre back with him to the meetings.

It was widely speculated his contract, which expires at the end of the month, would not be renewed after the team fell to the Cleveland Indians in the American League Division Series. Owner George Steinbrenner voiced that sentiment after the Yankees lost the first two games of the series.

Though he opted to avoid the question directly, the 67-year-old made it clear during the post-game news conference after the series ended that he was well aware he may have just managed his final game in pinstripes.

"This has been a great 12 years," Torre told reporters. "Whatever the hell happens from here, I'll look back on these 12 years with great, great pleasure based on the fact that I am the kid who had never been to the World Series other than to see my brother play in the 50s, to have been to six world series and going to the post season – I can tell you one thing: it never gets old."

Torre's career managing the Yankees began after the 1995 season. At the time, many media outlets criticized Torre's hiring as he'd never managed in the American League before then, and achieved only mild success during tenures as manager of the St. Louis Cardinals, Atlanta Braves, and New York Mets.

He answered those critics by winning the World Series in his first season in 1996, and went on to capture three more championships from 1998-2000. He guided the Yankees back to the World Series in 2001, before falling to the Arizona Diamondbacks, and again in 2003, where they lost to the Florida Marlins.

In 2004 the Yankees lost to the Boston Red Sox in a historic ALCS that saw Boston come back from a 3-0 series deficit and win four straight to advance to the World Series, which they would go on to win.

Questions surrounding Torre's future would become a hot media topic again after the Yankees were eliminated from each series.

There was also growing frustration after the team struggled during the first half of the 2006 and 2007 seasons.

Despite those times of doubt, there is no question at all that Torre's tenure as manager will be worthy of a spot in the Hall of Fame, and his credentials are a large reason why the majority of fans wanted him back. A wcbstv.blog asking who should manage the Yankees in 2008 resulted in an overwhelming response, with nearly 75 percent of voters choosing Torre.

"These fans are very special. You can feel their heartbeat," Torre said after this season's ALDS.

Even Mayor Michael Bloomberg spoke out about Torre, saying he would bring him back again if he had any say.

"Keep Joe. Keep all the players you can. It's a great team. It just didn't work this year," fan John Garretto said.

TrackBack URL for this entry:
http://gaysocialites.blog/magazine-mt/mt-tb.fcgi/2562