Rosie O'Donnell says she was fired from the View 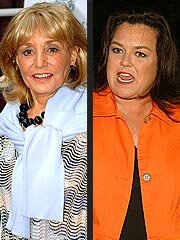 Roseanne invited Rosie on stage during the late night show.  O'Donnell opened with "When I was fired by Barbara Walters..."

What? What? What?  That isn't the original story!  I thought it was a mututal decision for Rosie to leave and it had everything to do with contract negotiations and a blow up with Elisabeth Hasselbeck.

Rosie did try to give Babwa props by saying "But she paved the way for women," Rosie said. "She interviewed Presidents ... "  as Roseanne chimed in blurting out "Like Abraham Lincoln."

Now, I just wonder if Babwa will respond?!

i dont think there is ANY chance whatsoever that Ro got fired. she needs to grow up

I'm tired of hearing about Rosie O'D, get her out of the news already!

TrackBack URL for this entry:
http://gaysocialites.blog/magazine-mt/mt-tb.fcgi/2453