« Today is the last day to vote!! | Main | Seen: Perez Hilton getting booed » 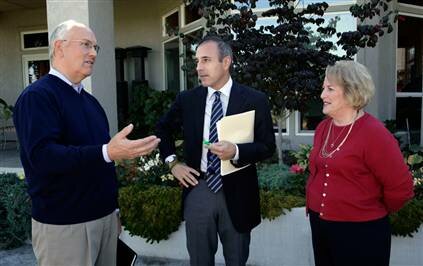 Senator Larry Craig sat down with NBC's Matt Lauer over the weekend to tape a show set to air on Tuesday night.

Both Craig said his wife Suzanne denied the senator is gay even though he has already pleaded guilty to looking for sex in a men's bathroom.

"People know me and know that I would never do that," said Suzanne Craig. "That's almost like selling your soul for something."

"I love this woman very, very much," Larry Craig said, according to MSNBC.blog. "The day I found her, I fell deeply in love. And we're heading toward our 25th anniversary."

Craig also said he felt like Republican presidential hopeful Mitt Romney "threw me under the campaign bus" when his scandal hit the news.  Coincidentally, both Romney and Craig have been nominated into the gaysocialites.blog Stupid Bitches Club.

"He not only threw me under his campaign bus, he backed up and ran over me again," Craig said.

Craig was Romney's Senate liaison before the gay senator was asked to resign shortly after he was outed in the bathroom.

"Gov. Romney simply believes that a public office is a public trust," Romney spokesman Kevin Madden said. "He believes when a public official enters a guilty plea, they have broken that public trust and should step aside for the sake of their constituents."

Craig originally resigned from his Senate seat, but withdrew his resignation and decided to finish his current term.  Craig also tried to withdraw his guilty plea, but the request was denied.

TrackBack URL for this entry:
http://gaysocialites.blog/cgi-sys/cgiwrap/cwinters/managed-mt/mt-tb.cgi/2530