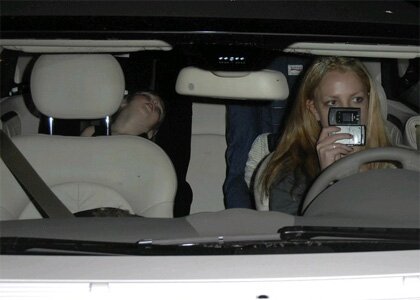 It seems as though there is more trouble brewing for Britney Spears.  TMZ.blog is reporting that the fallen pop star has failed one of those court ordered drug and alcohol tests.

This is definitely bad timing for Spears as her ex-hubby Kevin Federline will be back in court this week to prove that she is not a good mother.

Federline's attorney is headed back into court this week to try and ban Spears from driving with her kids in the car.

TMZ also reported last week that Britney was spotted breezing through a red light with her kids and a court appointed monitor in the car.

As for the alleged failed drug test, Britney's friends tell TMZ it was a false positive.

Can drug tests have false positives?  I guess the truth will come out in court!

Yes a False positive means that the test showed a drug but it happens to be one that is prescribed to her. She did not test positive for an illegal drug or alcohol. TMZ seems to slander Britney with these type articles constantly. I would think their readers would get sick of all the misleading and ultimately false info. I have even less tolerence for those that re-print the info knowing it is false like "GaySocialites". The title says "Spears fails drug test" but the last paragraph shows that the author knows this is not true. Poor quality reporting..

Jodi, are you retarded? It's not false or misleading when SHITNEY SPEARS DID ACTUALLY FAIL A DRUG TEST. She failed it. End of.

TrackBack URL for this entry:
http://gaysocialites.blog/cgi-sys/cgiwrap/cwinters/managed-mt/mt-tb.cgi/2842