« Is Beauty and the Geek's first male beauty a phony? | Main | It's a boy for Tim and Elisabeth Hasselbeck » 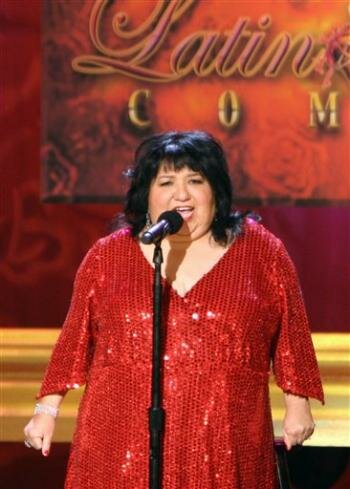 Stand-up comic Marilyn Martinez has died at 52 years old, according to her hustband.

According to the Associated Press, Martinez died Nov. 3rd of complications from colon cancer.

LOS ANGELES (AP) — Marilyn Martinez, a sassy standup comic who performed with the Original Latin Divas of Comedy and other Latina troupes, has died, her husband said Friday. She was 52.

"Marilyn was out there to make the fans excited. She wasn't out there for stardom and fame," he said. "And she didn't want to be remembered as a dirty mouth."

"She used to tell me she was a triple minority. She was fat, she was a woman, she was Hispanic," he said.

Raised in Denver, Martinez tap-danced on a local television show as a child before funneling her love of acting, and food, into standup routines, according to her longtime manager, Scott Montoya.

She moved to Los Angeles around 1989, he said. Her routines often included frank talk about sex and men.

"She was getting away with saying a lot of crazy stuff," said comedian Carlos Mencia, who performed alongside Martinez and knew her for more than a decade.

"It wasn't like, 'I'm a woman and let's talk about flowers and shopping.' ... But she could do clean if you wanted her to."

In L.A., Martinez connected with her Mexican roots and in the mid-1990s joined Latina troupe the Hot and Spicy Mamitas, Montoya said.

She also became a member of the Hot Tamales with Eva Longoria and was "the anchor" of the Latin Divas of Comedy, with a Showtime special earlier this year in the same vein as the hit Latin Kings of Comedy, Montoya said.