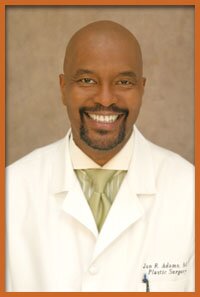 In today's society, when you work with a celebrity (or their mommy), you basically open yourself for public inspection.

Donda, is of course the mother of Kanye West, who died on Sunday after undergoing resconstructive surgery with Adams.

TMZ.blog has uncovered Dr. Jan Adams' shady past, and trust me... he is no stranger to malpractice suits.

Bonita Hovey claims in December 2005, Dr. Adams and other doctors performed a tummy tuck on her and botched the job.

In a suit filed in Orange County Superior Court, Jana Beighle claims she went in for "a left breast capsulectomy." She says Adams was her doctor, and she was never told he "had an undisclosed history of medical malpractice claims and judgments."

In a lawsuit filed in Los Angeles County Superior Court, Teana Lucas claims she was a bartender and Dr. Adams was a customer. She says he agreed to perform liposuction on her upper arms and abdomen. Adams later evidently started doing "home visists" with Lucas and got her pregnant.

Terrie Cage claims on June 27, 2007, Dr. Adams and another doctor "negligently and carelessly examined, diagnosed, cared for, treated and performed surgery upon plaintiff, failing to follow the standard care ..." As a result, Cage alleges she was "rendered sick, sore, lame and disabled."

If I had to guess, Kanye West is going to sock it to Dr. Jan Adams - and it seems that he has every right to do so.

TrackBack URL for this entry:
http://gaysocialites.blog/magazine-mt/mt-tb.fcgi/2871