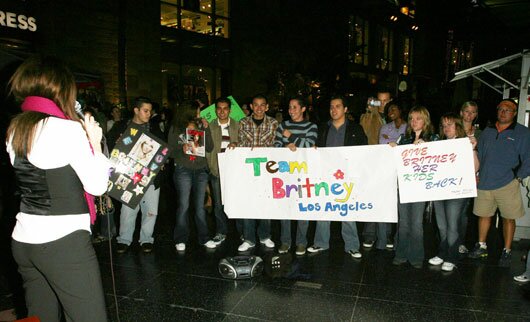 Even when everyone else has seemingly given up on Britney Spears, this group who calls themselves "Team Britney" showed up in Los Angeles on Saturday to defend the stale pop tart.

Carrying signs that demanded Spears get her kids back, the future Proactive customers marched down the Hollywood Walk of Fame to defend Britney.

Then Britney ran over them with her car... JUST KIDDING!!!!

I wouldn't be surprised if they all met up at Starbucks later for a latte hoping to get a glance at Britney.

Either way, couldn't these geeks find something better to do on a Saturday night in Hollywood?

So? She does have fans. After reading so many false stories on her, it's no wonder many give up on her. If they only printed the true stories, it would be a fraction of what they put out now. Maybe people wouldn't be so hard on her then. I'm not saying she's perfect, just that "news" does tend to put out an overly negative image of her. And yes it can be shown that many stories aren't true with a little simple research and searching etc.

TrackBack URL for this entry:
http://gaysocialites.blog/cgi-sys/cgiwrap/cwinters/managed-mt/mt-tb.cgi/2846