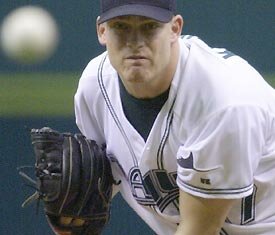 Kennedy was evidently in Tampa to attend a wedding when he collapsed and died.

"We are shocked and terribly saddened by the passing of Joe Kennedy," Paul Godfrey, president and chief executive of the Toronto Blue Jays, said in a statement issued by the team.

"I offer my deepest condolences and prayers to his wife Jami, and son Steffen."

Joe was traded to the Colorado Rockies in 2003 and to the Oakland A's in 2005. He pitched for the Arizona Diamondbacks in 2007 and ended the season with the Toronto Blue Jays before becoming a free agent.

TrackBack URL for this entry:
http://gaysocialites.blog/magazine-mt/mt-tb.fcgi/2983