« Nancy Grace brings one of the twins home! | Main | Kevin Federline has a Britney-do! » 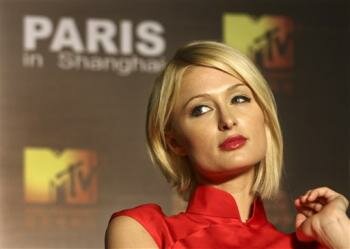 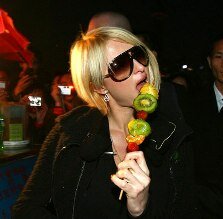 Paris Hilton passed on Turkey in Hollywood and opted for fruit in China this Thanksgiving.

Miz Hilton headed for Shanghai during the Thanksgiving holiday for the MTV Style awards.

"Shanghai looks like the future!" Hilton said in a news conference at the Hyatt on the waterfront, one of the newest landmarks in a city teeming with new skyscrapers.

While in Shanghi, Hilton was photographed enjoying some Chinese favorites like the authentic taste of Shanghai's juicy steam buns and flower tea and the crowding common in the city of more than 20 million.

Paris seems to have just as many fans in China as the US, but the throngs of fans didn't stop Hilton.  She carried on with her shopping, pausing to hug an elderly lady and to pose in several dresses by Chinese designer Lu Kun, one of the city's hottest new fashion stars.

It takes more than a few fans and hundreds of paparazzi to hold down Paris Hilton!

TrackBack URL for this entry:
http://gaysocialites.blog/magazine-mt/mt-tb.fcgi/2977