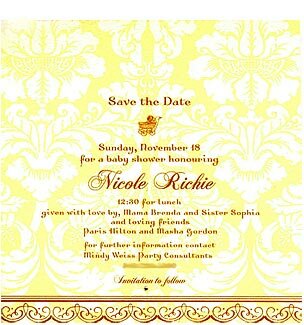 This Sunday is Nicole Richie's baby shower, hosted by Brenda (her mother), Sophia (her sister) and Paris Hilton (her best frienemy).

According to InTouch, the menu will consist of Nicole's favorite munchies including sushi, coconut shrimp, lobster, lemon-pepper chicken, fruit and cake.

I guess my invitation is still in the mail, because nothing has come to my address with Paris Hilton or Nicole Richie's return stamp on it... ever!  I guess I'll just have to eat an array of seafood and cake in honor of Nicole's baby in the bun.

InTouch is also reporting that Nicole and baby daddy Joel Madden are having a boy.  She's due in January.

TrackBack URL for this entry:
http://gaysocialites.blog/cgi-sys/cgiwrap/cwinters/managed-mt/mt-tb.cgi/2893