« Here's how the writer's strike might affect you: | Main | Kylie Minogue 'konnects' with her fans online » 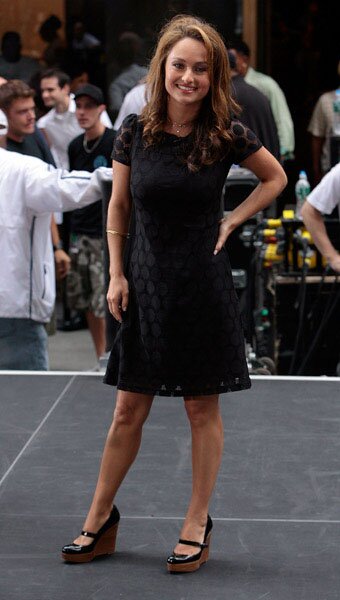 Today show contributor Giada De Laurentiis announced she is pregnant on Monday morning's show.  I am not sure if De Laurentiis was just trying to make Matt Lauer feel better after NBC showed a picture of him getting sick on a boat or what, but Giada blurted this out:

“I have to say I kind of understand how he’s been feeling, because the last four months, I’ve been feeling that way,” she told TODAY’s Natalie Morales and Hoda Kotb in the show’s studios in New York. “So I thought I’d share with you guys something I can’t hold back any longer — come April, I’m going to be a mom!”

After getting hugs from everyone in the studio, Al Roker gave De Laurentiis a thumbs-up from the cloud forest on the equator in Ecuador, while Ann Curry, battling the Antarctic cold inside a red anorak in McMurdo Station, and Lauer applauded.

De Laurentiis married fashion designer Todd Thompson in 2003.  She is 37 years old. Giada is best known for her work on the Food Network. She is also a published author. De Laurentiis and Thompson are expected a girl!

TrackBack URL for this entry:
http://gaysocialites.blog/cgi-sys/cgiwrap/cwinters/managed-mt/mt-tb.cgi/2760