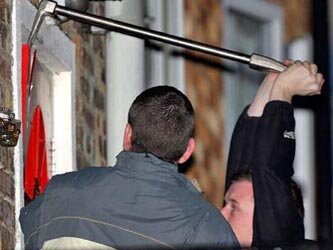 The answer is yes.  For once, Perez Hilton broke a story that is actually true.

Singer Amy Winehouse's home was raided on Thursday.  Neither Amy nor her husband Blake Fielder-Civil were home when police weaved in and out with video cameras.

As you can see in this photo, cops armed with battering rams and crowbars clawed their way into Amy's Camden house at around 5:00 in the evening.

"The only thing I can tell you is that it has nothing to do with drugs and that Amy is fine and she has not been charged or arrested."

Amy was spotted wandering around the neighborhood while the raid took place.  Blake was seen leaving about an hour before the cops showed up.

It looks like the London police are trying to shut Amy Winehouse down!

Her hubby, Blake, is also probably going to get some jail time for getting busted with GHB on Monday.  Why didn't he just pop open some of those Aqua Dots, I hear those are packed with GHB -- no joke.

TrackBack URL for this entry:
http://gaysocialites.blog/magazine-mt/mt-tb.fcgi/2809