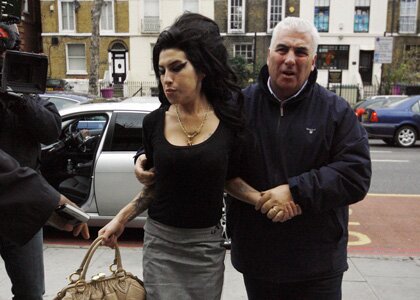 Amy Winehouse blew kisses and mouthed, "I love you" as her husband Blake Fielder-Civil sat before a judge on Saturday in London.

Blake Fielder-Civil and his friend Anthony Kelly appeared at Thames Magistrates Court in east London where they were both charged with conspiracy to pervert the course.  They basically tried to pay off witnesses set to testify against them in another case.

As the judge ruled, Winehouse looked distraught and didn't make eye contact with either Blake or the commissioner.

Amy was joined by her father (both pictured here) and Babyshambles singer Pete Doherty in the public gallery.  We all know Amy's father hates Blake, and Pete Doherty is just a bad influence in general.  I thought he was back in rehab anyway?

Both Fielder-Civil and his co-hort will remain in jail until at least November 23rd.

i heard that pete doherty has a thing for amy winehouse.