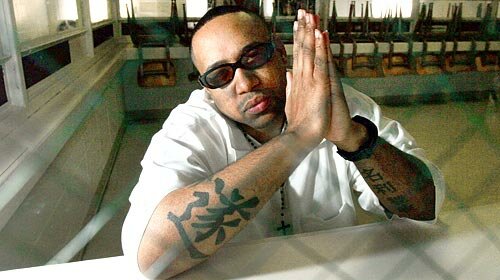 Investigators say it seems as though the rapper died of Natural causes.

LOS ANGELES (AP) — Pimp C, one-half of the veteran Houston rap group UGK, was found dead in an upscale hotel on Tuesday. He was 33.

"It is with great regret that I must confirm that Chad Butler aka Pimp C, one half of the legendary UGK, was in fact discovered dead this morning," his publicist, Nancy Byron, said in a statement. "Manager Rick Martin is asking that everyone please respect his family and those close to him at this time and refrain from rumors and innuendo."

Butler and his partner, Bernard "Bun B" Freeman, were pioneers of Southern rap, and hit the mainstream with their cameo on Jay-Z's smash "Big Pimpin'." Though they never enjoyed the pop-chart success of some other rappers, their 1996 CD "Ridin' Dirty" is considered a rap classic, and their laid-back sound, complete with gangsta tales of creeping through humid streets gripping wood-grain steering wheels, was influential in shaping the Southern rap movement.

The duo's career was derailed when Butler was jailed for three years in 2002 on gun charges. He released an album while in prison, and this year the group made a comeback with the critically acclaimed album "Underground Kingz," which included the hit "Int'l Player's Anthem (I Choose You)," featuring OutKast.

Barry Weiss, CEO of their record label, Jive, said in a statement: "We mourn the unexpected loss of Chad. He was truly a thoughtful and kind-hearted person. He will be remembered for his talent and profound influence as a pioneer in bringing southern rap to the forefront."

Butler, who grew up in Port Arthur, Texas, came from a musical lineage. His father was a professional trumpet player, and the rapper studied classical music in high school. He even received a Division I rating on a tenor solo at a University Interscholastic League choir competition.

"That's how I came up listening to everything," he told The Associated Press in a 2005 interview. "Music don't have no color or no face. It's a universal language. I think being exposed to all that kind of stuff influences the way I make records."

But it was rap music that would become his passion. Together with Bernard "Bun B" Freeman, Butler's friend since junior high, they started UGK, short for Underground Kingz.

TrackBack URL for this entry:
http://gaysocialites.blog/magazine-mt/mt-tb.fcgi/3101