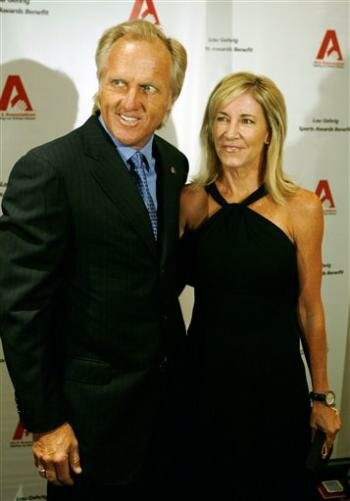 Chris Evert and Greg Norman are engaged to be married.  The announcement comes less than a year after divorces from longtime spouses.

Chris and Greg got engaged Sunday night, according to Tami Starr, director of Chris Evert Charities in Boca Raton, Fla.

"They're not sure of a wedding date yet," Starr said. "They're both extremely happy they've found each other."

Evert, who won 18 Grand Slam singles titles, wore a large diamond on her ring finger at a news conference Friday to announce a new tennis center at Pearl Valley Golf Estates, which is hosting the South African Open. Norman is playing in the tournament.

In September, Norman reached a multimillion-dollar divorce settlement with his wife of 26 years, Laura Andrassy. The 52-year-old Australian won the British Open in 1986 and 1993.

TrackBack URL for this entry:
http://gaysocialites.blog/magazine-mt/mt-tb.fcgi/3193