« Did Jodie Foster finally come out of the closet? | Main | Inside this week's HX Magazine » 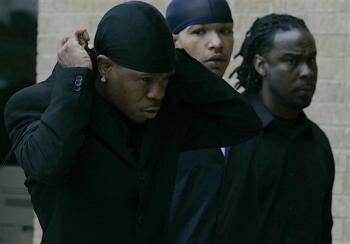 Rapper Pimp C was laid to rest on Thursday in Texas.

Pimp C, born Chad Butler, was found dead in the Mondrian Hotel in Los Angeles on December 4th.  He was 33 years old.

In this photo: Chamillionaire, left, adjusts his bandanna as he arrives for the funeral of rapper Pimp C Thursday, Dec. 13, 2007 in Port Arthur, Texas. (AP Photo/Pat Sullivan)

The funeral was held at the Robert A. Bowers Civic Center in the rapper's southeast Texas hometown of Port Arthur. Bun B, Slim Thug, Chamillionaire, J Prince and Willie D of the Geto Boys were among the rappers who attended.

Pimp C, one-half of the trailblazing rap duo Underground Kingz, was found dead Dec. 4 in the Mondrian Hotel in Los Angeles. He was 33.

Officials said the rapper, whose real name was Chad Butler, apparently died in bed and there were no signs of foul play. Autopsy and toxicology results weren't yet available.

UGK laid the groundwork for the unprecedented success of Southern rap in this decade, and countless rap superstars name the group as a major influence.

Pimp C produced most of UGK's music and would occasionally sing in the group's songs.

He and Bun B formed UGK in the late 1980s and had the first of six major label releases in 1992. Despite an almost fanatical following in Texas and the South, and the critical acclaim of their 1996 album, "Ridin' Dirty," mainstream success evaded the duo for the majority of their 15-year career.

Still, Bun B's witty and thoughtful lyrics with Pimp C's almost hypnotic beats and over-the-top delivery on themes of sex, money and drugs in a seductive drawl were an irresistible combination to many.

The group seemed to be on the cusp of gaining nationwide attention before Pimp C was sent to prison for a probation violation on an aggravated assault charge in 2002.

Though the duo couldn't make any music while he was locked up, it was then that UGK's popularity soared as rappers and fans made "Free Pimp C" their rallying call.

Pimp C was released from prison in December 2005 and immediately went to work on his second solo album, "Pimpalation," which sold more than 500,000 copies.

Then came 2007. UGK notched their first No. 1 album, thanks in large part to the soulful single "International Player's Anthem (I Choose You)," featuring OutKast.

The song, and its accompanying video, showed Pimp C at his brash and uncompromising best. Draped in a floor-length white fur coat, matching hat and crisp white suit, he managed to touch on women, money, expensive cars and outdoing a rival in his 30-second verse.

Two days after Pimp C's death, the single garnered UGK their first Grammy nomination in the category of best performance by a rap duo or group. They appeared on Jay Z's hit "Big Pimpin'," which was nominated in 2001, but this was the first nomination for their work.

TrackBack URL for this entry:
http://gaysocialites.blog/magazine-mt/mt-tb.fcgi/3189