Saleisha is America's Next Top Model 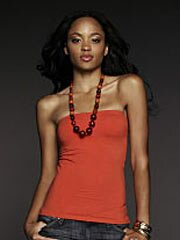 Saleisha beat out the two blondes Chantal and Jenah during the "Top Model" finale.

Jenah was the first to go after she had a breakdown in the judging room revealing that she has lots of cooped up issues.  Chantal was the first called for the final two, but she and Saleisha still cried like babies as Jenah was sent packing.

Saleisha won the show based on her runway performance in the final show and the photos taken this season.  Saleisha really proved herself during the fashion show.  Chantal even knocked one of the guys on stilts on his ass.

TrackBack URL for this entry:
http://gaysocialites.blog/cgi-sys/cgiwrap/cwinters/managed-mt/mt-tb.cgi/3179