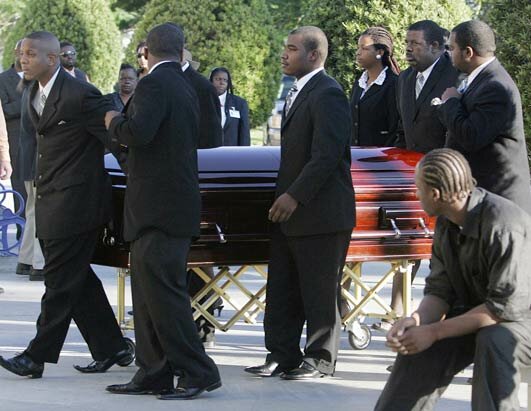 Taylor died last week after some street thugs broke into his house and shot him.  He is survived by a girlfriend, Jackie Garcia, and their 18-month-old daughter.

MIAMI (AFP) — Sean Taylor was recalled for the joy and passion with which he played American football here Monday at a funeral service before 2,000 people where Reverend Jesse Jackson called for curtailing gun violence.

The 24-year-old Washington Redskins star defender was fatally shot in his home by intruders one week ago, dying last Tuesday after severe blood loss from a severed femoral artery.

"Even champions live in danger. Not all of us are safe in our own house," Jackson said. "Our American house is on fire. We've accepted violence as the norm. It must be rejected."

Jackson recalled US mass murders with gunfire in recent years and called for National Football League players to work in their communities to curb gun violence in tribute to Taylor, Washington's safety for more than four seasons.

"One day it's Columbine. One day it's Virginia Tech... Now it's Sean Taylor. We're slow learners. We're in a hole looking for a shovel when we need a rope. We need a new game plan. We need a stronger defense," Jackson said.

"We're all the safety now. NFL players, you must play the safety between your community and violence now. If we learn from his death we've saved many a touchdown. In your living and dying you still inspire us to win the big game."

The entire Washington Redskins team attended the funeral less than 24 hours after losing 17-16 to Buffalo in their first game since Taylor's death and only three days before they return to the field to face Chicago.

"God, take care of Sean until we get home," Redskins coach Joe Gibbs said. "He had an excitement for life that is going to live forever."

Redskins running back Clinton Portis, Taylor's best friend on the team, joked that, "You could be getting ready to get into the shower and he'd come up and say, 'Hey, did you see 'The Flintstones' last night?"

Teammates have tried to take inspiration from Taylor's passion for the game.

"There's nobody in the NFL that played with more heart than Sean Taylor," Portis said.

"If anything motivated me to play football, it was the thrill of seeing Sean Taylor hit somebody. I don't fear much but if I was on the opposing team I might fear number 21.

"Whatever you do, do it with all you have."

"My heart is broken," former Redskins teammate Lavar Arrington said, "I thought when he got there I would be one of his guardian angels. He turned out to be one of mine."

NFL commissioner Roger Goodell, who has seen four league players die this year and two of those from gunshots, praised Taylor's maturing from run-ins with the law earlier in his career.

"The NFL was proud of Sean Taylor, not just his abilities. He loved football. Football loved him back. More importantly it's what he was as a man and what he was becoming as a man. He made an impact on all of us," he said.

"We should make a positive difference in other people's lives as he did in ours."

Taylor's girlfriend Jackie Garcia, the niece of actor Andy Garcia, and their 18-month-old daughter watched from the front row in the arena at Florida International University.

TrackBack URL for this entry:
http://gaysocialites.blog/cgi-sys/cgiwrap/cwinters/managed-mt/mt-tb.cgi/3092