Victoria Beckham on the cover of Elle 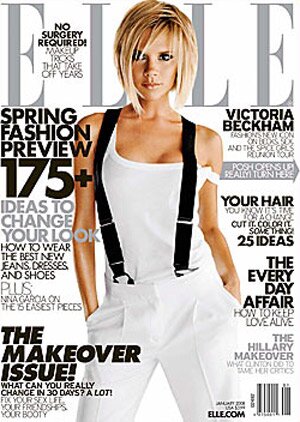 Victoria Beckham looks amazing on the cover of the latest edition of Elle Magazine.

Beckham shot this cover back in October when she was still sporting the metalic locks.

Here are some highlights from the interview in Elle:

Posh on sleeping naked:
“I sleep naked. You don’t sleep with David Beckham. (giggles) I’m going to be naked if I’m getting in bed with him every night.”

Posh on being an outcast in school:
“They were literally picking things up out of the puddles and throwing them at me. And I just stood there, on my own. No one was with me. I didn’t have any friends. People would push me around, say they were going to beat me up after school, chase me. It was miserable, my whole schooling, miserable. I tried to be friends with people, but I didn’t fit in. So I kept myself to myself.”

Posh on 2008:
“Someone told me I’m going to feature big this year with the drag queens. I’m so camp! I’m such a gay man trying to get out. I don’t give a s— what anybody thinks.”

TrackBack URL for this entry:
http://gaysocialites.blog/cgi-sys/cgiwrap/cwinters/managed-mt/mt-tb.cgi/3118