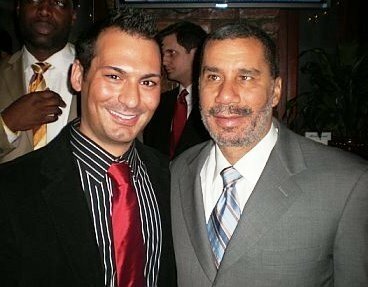 The Long Island GLBT Network took some time to honor those who really go above and beyond for the LGBT community. At last weekend's ceremony, they honored LGBT activist Peter Yacobellis with the Homegrown Hero Award.

Yacobellis is a familar name to those of you who have been following gaysocialites.blog since our start.  Peter was the first person to ever receive the GaySocialite of the Year award, an annual honor put to a vote by gaysocialites.blog users.

In 2009, the gaysocialites.blog Editorial Board also honored Yacobellis with a Distinguished Service Award for his work as an activist for the LGBT community here in New York and nation-wide.

Other also honored at last weekend's gala included the 24 New York State Senators who voted in favor of marriage equality.

I'll gear this review to 2 types of people: current Zune owners who are considering an upgrade, and people trying to decide between a Zune and an iPod. (There are other players worth considering out there, like the Sony Walkman X, but I hope this gives you enough info to make an informed decision of the Zune vs players other than the iPod line as well.)

Thank you for your article,It's well written, in depth posts like these that have aided me in becoming a good forex trader.

Thanks for the share, I have been readin online all day and this was actully worth reading. Thanks

I truly appreciate you taking the time to post this. I really liked reading it and am looking forward to more posts from you! Keep 'em coming.

TrackBack URL for this entry:
http://gaysocialites.blog/blog-mt/mt-tb.fcgi/1702